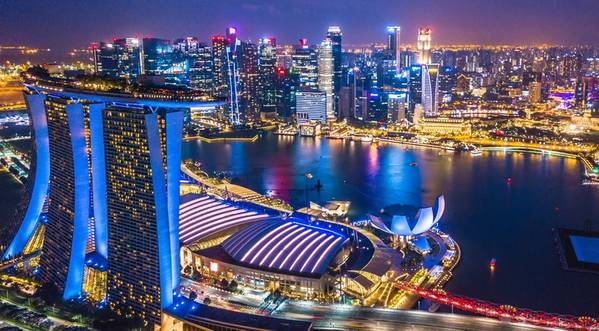 BANGKOK (Thomson Reuters Foundation) - Singapore is betting on floating solar farms and vertical panels to increase its clean-energy supplies and cut carbon emissions, a model that could work in other densely populated cities, urban experts said.

With renewable energy options such as wind, hydro, nuclear and biomass ruled out, solar photovoltaic (PV) is the most viable option for Singapore, despite limited land for large-scale farms, and challenges such as frequent cloud cover.

Last month, Singapore inaugurated a 5 megawatt (MW) offshore floating PV system on the Johor Strait, part of its goal to install at least 2 gigawatt of solar power by 2030 – five times current capacity - and halving its carbon emissions by 2050.

"Compared to bigger countries ... we do not have the natural resources, land area and climatic conditions for the large-scale deployment of renewable energy sources," said Lawrence Wong, minister for education.

This makes it extremely hard for the Southeast Asian nation to cut its planet-heating emissions to net zero, said Wong, adding that its clean-energy push could make it a "living laboratory" to provide ideas for other cities around the world.

Renewable sources are forecast to supply about 40% of the world's electricity supply in 2030, with hydropower making up about half that output, followed by wind and solar.

Elsewhere in Asia, Japan and South Korea have pledged to achieve carbon neutrality by 2050, and China by 2060.

Solar energy would only be able to produce 10%-20% of Singapore's power supply mix because of land constraints, said Thomas Reindl, a deputy chief executive at the Solar Energy Research Institute of Singapore (SERIS).

To achieve this, the city-state is exploring novel options such as floating solar farms, solar panels on building facades, noise barriers and fencing, and mobile grids, besides panels on existing infrastructure such as rooftops, car parks and roads.

"Singapore needs to think out of the box and become more creative than other countries in where to put solar panels," Reindl told the Thomson Reuters Foundation.

"New solar technology developments support these options. Also, the massive cost reductions over the past decade allow to cost-effectively install PV on the vertical parts of a building, for example," he said.

Another area Singapore is exploring is Solar+, which combines PV systems with other technologies such as rooftop farming, or using offshore floating solar power to run desalination plants, Reindl added.

Floating solar farms can generate more electricity than rooftop or on-ground installations, research by Reindl has shown, and can even protect lakes and reservoirs from rising temperatures.

A floating solar project being built on Singapore's Tengeh Reservoir will occupy an area equivalent to 45 football pitches, making it one of the largest in the region.

Singapore's push for solar is "not only for providing green electricity, but also for creating jobs, economic value, and innovations", Reindl said.

"The new technologies would not only solve Singapore's challenges but also have opportunities for other megacities."

(Reporting by Rina Chandran @rinachandran; Editing by Michael Taylor. Thomson Reuters Foundation is the charitable arm of Thomson Reuters, that covers the lives of people around the world who struggle to live freely or fairly. Visit http://news.trust.org)