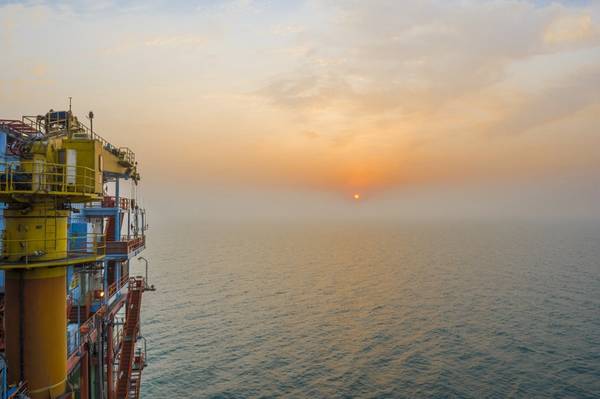 An offshore platform in China /Illustration only - Credit; ddukang/AdobeStock

China’s offshore oil and gas major CNOOC Ltd has put out a fire at a production platform in Bohai Bay and is focusing its efforts on searching for three people who went missing, the firm said on Friday.

In a filing to the Hong Kong stock exchange, the company said Monday’s fire at the V29 well of its V platform off China’s northern coast was put out the following day.

The blaze broke out as CNOOC took emergency measures to contain “shallow gas” that overflowed during a drilling operation, the firm added, but with no oil spill so far.

“The company carried out an oil spill check, and placed oil booms around the platform,” it said in the statement.

It evacuated 99 of the 102 staff but is still searching for the three missing, the company said.

CNOOC also estimated minimal production impact, of a loss of up to 600,000 barrels of output, representing 0.1% of annual production scheduled in 2021.

On Thursday, Chinese financial publication Caixin said the platform, part of the Penglai 19-3 oilfield in Bohai Bay, was affected after an oil spill during drilling of a new production well.

CNOOC holds a 51% interest in the Penglai project, with the rest held by the Chinese subsidiary of U.S. oil giant ConocoPhillips.

The Penglai 19-3 oil cluster, about 235 km (146 miles) off the northern city of Tianjin, is China’s largest offshore oil producing field, and is a typical high-pressure reservoir.

In 2011, cleanup efforts ran for several months after a severe oil spill in the same cluster, then operated by ConocoPhillips, polluted more than 6,000 square km of water in Bohai Bay.

Reporting by Muyu Xu in Beijing and Chen Aizhu in Singapore; Editing by Clarence Fernandez