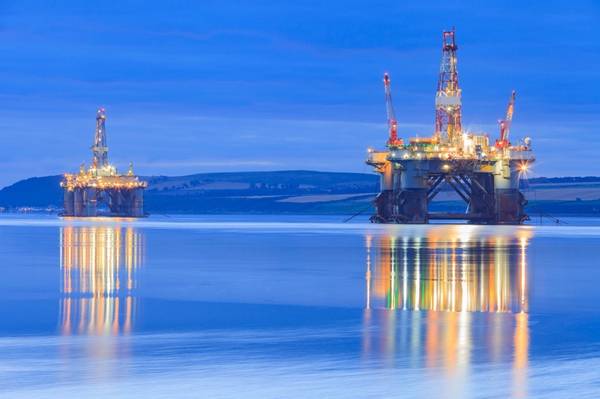 Robots could replace hundreds of thousands of oil and gas jobs globally and reduce drilling labor costs by several billion dollars by 2030, if there is an industry push for such a transition, Rystad Energy has found.

"Even when the Covid-19 downturn is finally past us, operators will have to continue exploring new avenues for cost reductions to be better equipped to withstand future market declines," Rystad said, adding that it has found that existing solutions could replace hundreds of thousands of oil and gas jobs globally and reduce drilling labor costs by several billion dollars by 2030.

One of the segments with much to gain from the adoption of robotics is drilling, as it is highly cost-intensive and involves carrying out dangerous tasks in challenging environments. Robotic solutions have already been introduced successfully in drilling operations, with companies such as Nabors at the development forefront, Rystad said.

Applying current supplier specs, which suggest that robotic drilling systems can potentially reduce the number of roughnecks required on a drilling rig by 20% to 30%, Rystad Energy estimates that such a reduction in both offshore and onshore drilling crews can bring cost savings of more than $7 billion in wages in the US alone, based on present wage levels.

"Inspection, maintenance and repair (IMR) operations are also ideal for robotic operations and is the segment where adoption of robotics has gained the most traction among operators in recent years. This has so far mainly been limited to subsea IMR activities, but we are now starting to see IMR robotics solutions also being used for topsides," Rystad said. 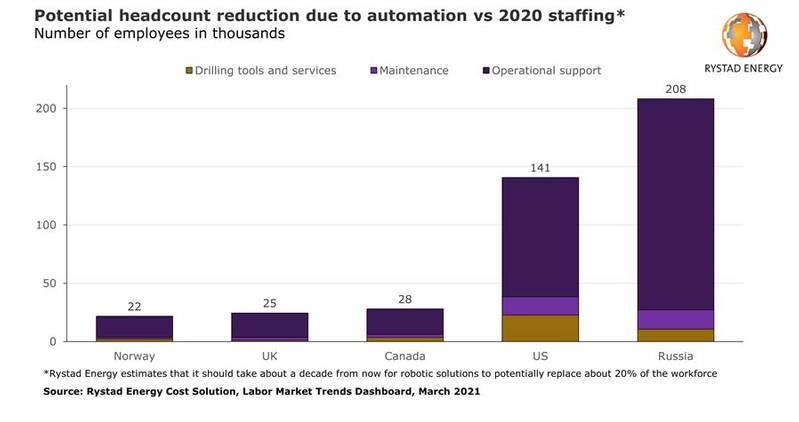 Overall, Rystad Energy believes that at least 20% of the jobs in segments such as drilling, operational support, and maintenance could in theory get automated in the next 10 years. Looking at the current staffing headcount of some key oil and gas producing countries, the US could reduce its staffing needs by over 140,000 employees and Russia by over 200,000 personnel. Canada, the UK, and Norway could shed between 20,000 and 30,000 jobs each, Rystad said.

"Despite the huge potential of robotics, operators should be aware that these savings will be partially offset by the considerable investments required for the adoption of these solutions, which may vary depending on the cost structure and whether the robots are owned or leased,” says Sumit Yadav, energy service analyst at Rystad Energy.

Nevertheless, Rystad says that the next generation of robotics solutions is already emerging within subsea IMR in the form of perpetually underwater robotics solutions that offer significantly lower costs and better reach than a conventional remotely operated vehicle (ROV). While a conventional ROV needs to be sent down from the surface, these new systems can stay underwater permanently and easily access places that are difficult to reach for conventional ROVs, irrespective of the weather conditions. 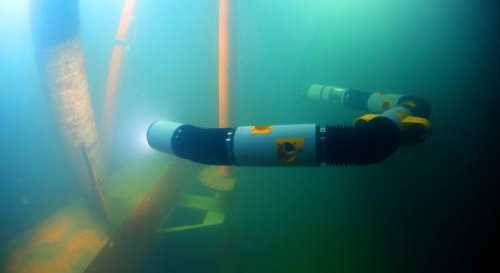 "Owing to their snake-like design, the robotic arms have the flexibility and agility to transit over long distances and carry out subsea IMR activities such as visual inspection, cleaning, and operating valves and chokes in highly confined spaces," Rystad added.

As an example that not all digitization and robotization translates into a reduction in manpower, Rystad pointed to Transocean, which has recently introduced wearable safety technology that alarms a crew member if they come too close to the drilling equipment. If the crewmember still doesn’t maintain a safe distance, the alarm will shut down the equipment.

Similarly, Rystad says, Diamond Offshore has launched the industry’s first cybernetic blow-out preventer (BOP) service. The service named Sim-Stack makes a virtual replica of the BOP hydraulically and electrically to assess its overall health and regulatory compliance. The system provides much faster information on component failures, reducing downtime and improving safety, and can also be used to train personnel, according to the rig operator.

"While the emergence of robotics in the oil and gas industry seems inevitable, we believe that full-scale adoption is still a few years away as the long-term reliability of robotics in complex 3D environments such as those found on offshore platforms is yet to be tested. Another challenge in the implementation of robotics is limited communication capabilities, especially between robotics units. If robots are to fully replace humans, it is imperative that these systems communicate seamlessly to unlock true value. The implementation of such communication systems is both complex and costly," Rystad said.

Finally, Rystad said, job cuts due to robotics are likely to be met with some resistance from labor organizations, and robotized work processes may also need to pass regulatory hurdles as authorities seek to ensure that the operational changes brought on by the new technology satisfy safety and environmental standards.