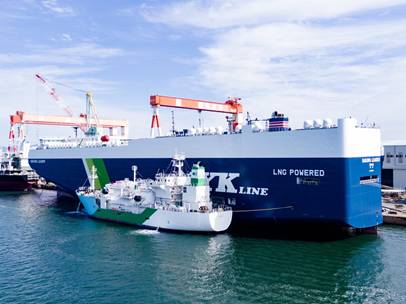 The move is aimed at providing an infrastructure needed for LNG-fuelled carriers and promoting a conversion of ships to LNG fuels to help achieve a target by the International Maritime Organization (IMO) to halve greenhouse gas emissions from shipping by 2050 compared to 2008, it said in a statement.

An LNG bunkering vessel, owned by the joint venture, supplied the fuel earlier this month to an LNG-fuelled pure car and truck carrier (PCTC) operated by Nippon Yusen that is under construction, marking the first ship-to-ship LNG bunkering in Japan, JERA said.

The number of LNG-fuelled ships in Japan is still small, but JERA expects it will grow amid a global drive toward decarbonization, a company spokesman said, though he added their bunkering service will be limited in the central region in Japan.

There are 174 LNG-fuelled ships in operation globally, with 226 more on order, according to DNV GL data.