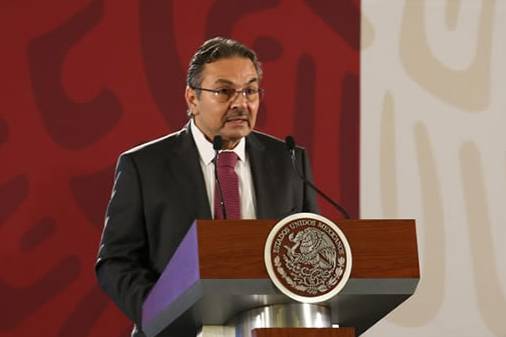 Mexico on Tuesday unveiled parts of a keenly awaited business plan meant to bring the world's most indebted oil company back from the abyss, but its vow of $7.2 billion in government support failed to dispel worries of a ratings downgrade.

Octavio Romero, CEO of Petroleos Mexicanos, or Pemex , presented the broad outlines of the 200-page plan at a news conference, saying a complete version would be published later on Tuesday.

Romero said the plan addressed an onerous profit-sharing tax that hands much of the company's income to the federal government and makes the company financially unsound.

A version of the full document reviewed by Reuters said that would represent a saving for the company of $6.6 billion over the next two years. It also outlined the government's $7.2 billion of financial support over the next three years.

The rest of the $104.6 billion Pemex said it will invest over the six-year term of President Andres Manuel Lopez Obrador will come from the company's own revenue, according to the document.

By comparison, Brazil's Petrobras has said it aims to invest $105 billion over the next five years, and unload $35 billion in assets over the same period.

"The business plan is the first step in a dialogue with the ratings agencies ... We're going to have a permanent conversation," new finance minister Arturo Herrera told journalists after lawmakers voted to approve his appointment.

"What we have to do now is, yes, be concerned about the credit rating but above all concern ourselves with increasing Pemex's production," he said.

The capital injections were "highly underwhelming," Citi Research said in a report, noting that by its own estimates Pemex needs $10 billion to $15 billion annually.

"The probability of a downgrade to junk by Moody's has gone higher," Citi said, adding that it predicted such an action within the next six months. "The disappointing plan reinforces our view that Mexico is a slow deteriorating credit."

Fitch downgraded Pemex's credit to speculative, or "junk," earlier this year while Moody's puts Pemex, which has some $106 billion in financial debt, at just one notch higher.

A downgrade from Moody's would formally confirm Pemex as a junk credit. If that happens, some funds whose mandates prohibit holding such assets would have to sell their Pemex bonds.

Mexico's peso weakened 0.5% against the dollar after the presentation.

Romero said about $2.1 billion had been set aside next year to finance the new $8 billion Dos Bocas refinery, a project ratings agencies see as adverse to putting the ailing company back on track.

Former Finance Minister Carlos Urzua cited his opposition to the refinery after he resigned last week, saying experts believed it would be far more costly than projected. Other critics say the refinery will not help Pemex meet its immediate aim to boost production, and could become a risk factor for Mexico's economy.

Focusing on easy-to-access onshore and shallow water fields, Romero vowed to raise Pemex production within three years and to reach 2.7 million barrels per day of oil by the end of Lopez Obrador's government in 2024, from a current 1.8 million bpd.

Sticking to the government's position since it took office in December, Romero said it made more sense to invest in these fields to rapidly increase output, rather than the deepwater area of the Gulf of Mexico the last government wanted to tap.

Luis Gonzali, a portfolio manager at Franklin Templeton Investments, warned that a capital injection would not yield fast results.

"The cycle of investment and return in Pemex, and in any oil company in the world, takes from 5 to 7 years," he said in an investor note. "Pemex has to fix its problem today."

Lopez Obrador said he hoped ratings agencies would act "professionally" in response to the news. He had previously lashed out at Fitch after it downgraded Pemex, saying it was not objective.

Moody's, Fitch and S&P Global did not reply to requests for comment on the business plan.

Investors are watching to see how ratings agencies respond, CI Banco said in a report, paying particular attention to whether the plan will allow Pemex to reach its production goals without disrupting public finances.

"Doubts still remain about whether the capital to be injected and the reduced tax burden are sufficient," said James Salazar, a CI Banco economist. "I believe ratings agencies will give the benefit of the doubt at least through this year."