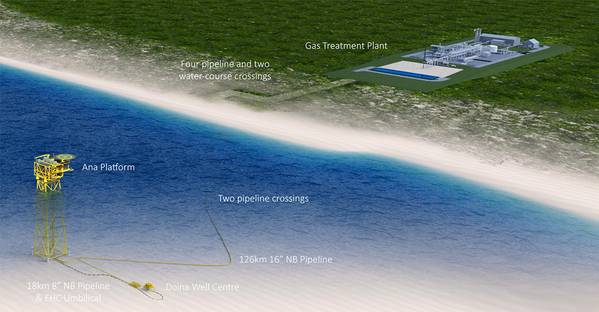 Black Sea Oil & Gas (BSOG), controlled by private equity firm Carlyle Group LP, announced it has received Romanian government approval from the Romanian Government through the National Agency for Mineral Resources (NAMR) for its plan to develop the offshore Ana and Doina natural gas fields which make up the Midia Gas Development Project (MGD Project), in the Black Sea.

Gigi Dragomir, NAMR President, said, “The development of the Ana and Doina gas fields offshore Romania is a top priority for NAMR, which supports the implementation of the Romanian Offshore Project that could lead to the diversification of the supply sources in Romania.”

The MGD Project comprises the Ana and Doina gas fields (320 Bcf P50 contingent resources) which were discovered in 2007 and 1995 respectively. Both are of latest Miocene to Dacian age, shallow marine sandstone (shore face) reservoirs, some 120 km offshore Romania, in the XV Midia Shallow area where the water depths are of 70 meters.

The first new offshore gas development in the Romanian Black Sea to be built after 1989, the project consists of five offshore production wells (one subsea well at Doina field and four platform wells at Ana field) a subsea gas production system over the Doina well which will be connected through an 18 km pipeline with a new unmanned production platform located over Ana field.

A 126-kilometer gas pipeline will link the Ana platform to the shore and to a new onshore gas treatment plant (GTP) in Corbu commune, Constanta county, with a capacity of 1 BCM per year representing 10% of Romania’s consumption. The processed gas will be delivered into the National Transmission System operated by Transgaz at the gas metering station to be found within the GTP.

BSOG and its co-venture partners Petro Ventures and Gas Plus reached FID for the project on February 6, 2019,

In 2019, BSOG anticipates having completed the detailed engineering for the MGD Project, commenced the fabrication of the Ana Wellhead Platform at a shipyard in Agigea, commenced the civil constructions at the GTP site in Corbu and have purchased and delivered a number of company items. 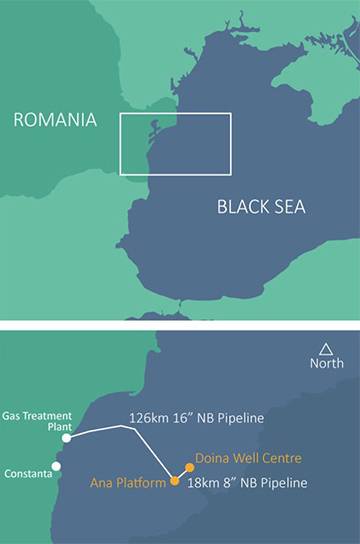