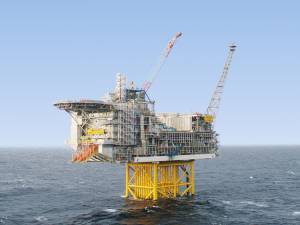 Aker BP said it will become the first oil company in Norway to control operations of a permanently manned offshore platform from land from next year.

Operating platforms remotely can be done with fewer staff than doing it offshore and other oil companies are also looking to do so to reduce production costs.

"It will be the first manned platform in Norway to be controlled from onshore," Aker BP's spokesman Ole-Johan Faret said in an email to Reuters.

Norway's largest oil and gas firm Equinor started remote operations of is Valemon field last year, but that platform only has workers on board periodically.

Aker BP said it expected to complete the switch of controls in the second quarter of 2019, and even after that it would keep some trained people on the platform who could take controls back if needed.

"It's a learning curve for us, so we will do that gradually to ensure safety," Faret said.

More generally, Aker BP is pushing ahead in digitizing its assets and operations. Two years ago its top shareholder, Aker, set up software firm Cognite to do so because it could not find a suitable one.

Sweden's Lundin Petroleum, Aker BP's partner in Ivar Aasen, has signed up to use the platform created by Cognite to share operational data from its installations offshore Norway.