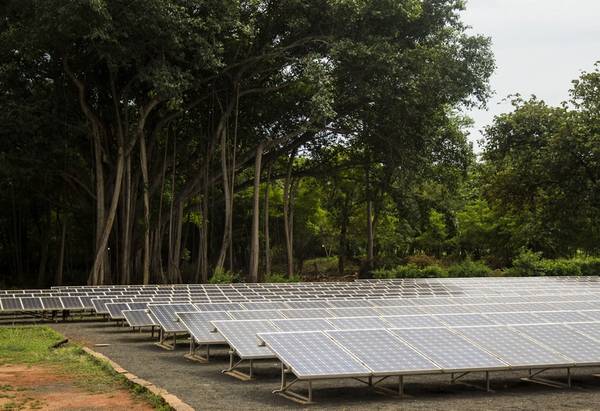 The small companies' difficulty in raising cash is keeping them away from government power project auctions, restricting their growth and crippling their ability to refinance loans, said a consultant from a top global consultancy firm.

With many smaller operators being gobbled up or offering themselves for sale, the number of projects being developed could fall, potentially keeping India from its renewable energy targets, said the consultant, who did not wish to be named as he is directly involved with a company that cancelled a bond issue.

In a few years, there may be only a few big companies and a few regional firms active in India's renewable sector, he said.

The trend goes back at least to 2016, when Tata Power bought solar and wind company Welspun Renewable Energy, but the pace is expected to pick up.

"Smaller players are being squeezed out ... due to two main factors: cost of equipment and ... financing", said Alok Verma, executive director at Kotak Investment Banking, an arm of Kotak Mahindra Bank.

One of India's largest renewables companies, Greenko Group, said in June that it was buying 750 megawatts (MWs) of solar and wind assets from Orange Renewables, because the Singapore-based company saw few opportunities for growth. The deal has yet to be closed.

Essel Infra, with a renewable power capacity of 685 MWs, and Shapoorji Pallonji Group's 400-MW solar arm are also in talks to sell off their assets, one firm and two banks doing the due diligence for these companies have said.

Besides loans, other funding options have also been dead ends for the smaller companies, further limiting growth opportunities.

ACME Solar postponed an initial public offering (IPO) announced in September last year as the proposed share issue did not generate enough interest from investors, confirmed a banker who was directly involved in the listing attempt.

Mytrah Energy, a major mid-sized renewables company, called off a $300 million to $500 million bond issue earlier this year as that option also went dry for the sector, and it canned IPO plans as well, said a separate banker directly involved there.

This dearth of financing and trend towards consolidation could be a significant threat to India's target of 175 gigawatts (GWs) of renewables capacity by 2022, up from 71 GWs now, some analysts said.

Others said a concentration of bigger players, with more cash and better financing, could mean things move faster.

"Consolidation in the renewable energy industry augurs well for the overall success of the programme ... Large players have access to required capital at reasonable rates and can procure the latest technology," said Debasish Mishra, head of Energy, Resources and Industrials at Deloitte Touche Tohmatsu India.

Tata Power, one of India's largest power generators, said in May it plans to invest $5 billion to increase its renewable capacity in India fourfold over the next decade to 12 GWs.

More than doubling India's renewables capacity by 2022 will require $76 billion, including debt of $53 billion, the Ministry of New and Renewable Energy said in July.

Another problem in India's renewable sector is debt.

"Many mid-sized firms have taken debt to fund their equity," the partner of an investment firm said, adding that many such companies will need financial restructuring or have to put themselves up for auction.

This model of financing debt through equity is called mezzanine financing and tends to involve high interest rates and an option to convert debt to equity in future.

Both ACME and Mytrah are funded by Piramal Finance Ltd via mezzanine financing, according to statements by the companies at the time of funding.

For lending banks, this quasi-equity is seen as debt, making the liabilities of these companies look higher than usual, said the partner, who asked not to be named. The investment firm handles all kinds of financing, including mezzanine.

When companies with mezzanine financing go to banks for funds for upcoming projects, banks ask them for higher collateral or offer less cash in loan, said Kotak's Verma.

Fitch Solutions said in a note last week that India would likely miss its renewable capacity targets due to "risks stemming from bureaucratic, financing and logistical delays."