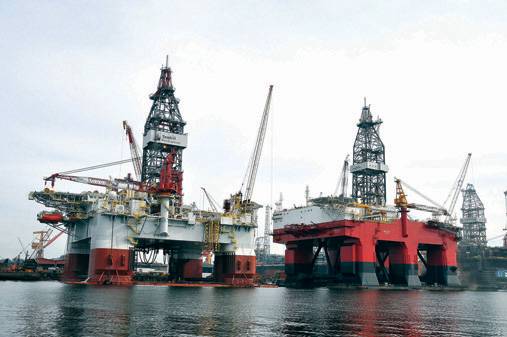 Sembcorp Marine said profit came in at S$5.3 million ($4 million) for the three-month period ended March, compared with S$37 million in the same period a year ago.

The year-ago profit was boosted by an one-off gain from the disposal of Sembcorp Marine's stake in Cosco Shipyard Co.

"Based on current secured orders, work volume for the foreseeable quarters is expected to remain low, and the trend of negative operating profit may continue," he said.

Recovery in rig orders is expected to take some time as most of the drilling segments remain oversupplied, with day rates and utilisation under pressure, the company said in a statement on Wednesday.

Orders at the company and bigger rival Keppel Corp slumped over the last two years on lower oil prices and an oversupply of rigs, but some analysts have been expecting the market to bottom out.