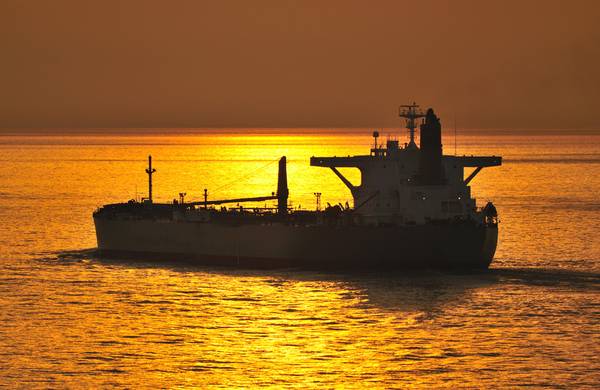 File Image (CREDIT: AdobeStock / © Carabay)
U.S. supplies to Europe set for all-time high in April; on course to overtake Russia, Saudi.
As OPEC's efforts to balance the oil market bear fruit, U.S. producers are reaping the benefits - and flooding Europe with a record amount of crude.
Russia paired with the Organization of the Petroleum Exporting Countries last year in cutting oil output jointly by 1.8 million barrels per day (bpd), a deal they say has largely rebalanced the market and one that has helped elevate benchmark Brent prices close to four-year highs.
Now, the relatively high prices brought about by that pact, coupled with surging U.S. output, are making it harder to sell Russian, Nigerian and other oil grades in Europe, traders said.
"U.S. oil is on offer everywhere," said a trader with a Mediterranean refiner, who regularly buys Russian and Caspian Sea crude and has recently started purchasing U.S. oil. "It puts local grades under a lot of pressure."
U.S. oil output is expected to hit 10.7 million bpd this year, rivaling that of top producers Russia and Saudi Arabia.
In April, U.S. supplies to Europe are set to reach an all-time high of roughly 550,000 bpd (around 2.2 million tonnes), according to the Thomson Reuters Eikon trade flows monitor.
In January-April, U.S. supplies jumped four-fold year-on-year to 6.8 million tonnes, or 68 large Aframax tankers, according to the same data.
Trade sources said U.S. flows to Europe would keep rising, with U.S. barrels increasingly finding homes in foreign refineries, often at the expense of oil from OPEC or Russia.
In 2017, Europe took roughly 7 percent of U.S. crude exports, Reuters data showed, but the proportion has already risen to roughly 12 percent this year.
Top destinations include Britain, Italy and the Netherlands, with traders pointing to large imports by BP, Exxon Mobil and Valero.
Polish refiners PKN Orlen and Grupa Lotos and Norway's Statoil are sampling U.S. grades, while other new buyers are likely, David Wech of Vienna-based JBC Energy consultancy said.
"There are a number of customers who still may test U.S. crude oil," Wech said.
The gains for U.S. suppliers could come as a welcome development for U.S. President Donald Trump, who accused OPEC on Friday of "artificially" boosting oil prices.
"Looks like OPEC is at it again. With record amounts of Oil all over the place, including the fully loaded ships at sea. Oil prices are artificially Very High! No good and will not be accepted!" Trump wrote on Twitter.
'Key Supply Source'
While the United States lifted its oil export ban in late 2015, the move took time to gain traction among Europe's traditional refineries, which were slow to diversify away from crude from the North Sea, West Africa and the Caspian.
"European refiners started experimenting with U.S. crude last year," said Ehsan Ul-Haq, director of London-based consultancy Resource Economics. "Now, they know more than enough to process this crude."
U.S. oil gained in popularity, sources said, in part because of the wide gap between West Texas Intermediate, the U.S. benchmark, and dated Brent, which is more expensive and sets the price for most of the world's crude grades.
This gap, known as the Brent/WTI spread, has averaged $4.46 per barrel this year, nearly twice as high as the year-earlier figure, Reuters data showed.
Wech of JBC Energy said the spread would likely persist in the near future.
The most popular U.S. grades in Europe are WTI, Light Louisiana Sweet, Eagle Ford, Bakken and Mars.
Prices for alternative local grades have been slashed as a result.
CPC Blend differentials recently hit a six-year low versus dated Brent at minus $2 a barrel. Russia's Urals also came under pressure despite the end of seasonal refinery maintenance.
WTI was available at 80-90 cent premiums delivered to Italy's Augusta, well below offers of Azeri BTC at a premium of $1.60 a barrel, according to trading sources.
U.S. oil is even edging out North Sea Forties, which is produced in the backyard of the continent's refineries.

Cargoes of WTI were offered in Rotterdam at premiums of around 50-60 cents a barrel above dated Brent, cheaper than Forties' premium of 75 cents to date.