Despite the slump in upstream spending, several noteworthy projects in the region are set to see major investments. Audrey Raj reports.

Capital spending on exploration and production in Asia is set to hit US$81 billion in 2016, down from the $100 billion spent in 2015. The reduction largely reflects lower CAPEX in Australia, as several mega liquefied natural gas (LNG) projects reach completion, as well as the deferral of new projects in Southeast Asia.

“All companies are under pressure to reduce spending, although some are better placed than others to prosper in a low oil price environment,” says Wood Mackenzie’s senior research manager for southern and southeastern Asia, Andrew Harwood.

“We are likely to see a rebalancing of corporate portfolios, away from high cost development themes, such as LNG or deepwater, in favor of onshore, shallow water or unconventional opportunities,” Harwood says.

Examining offshore spending in Asia, Infield Systems’ outlook for 2016 anticipates the region to see a 2% increase in comparison to 2015, with two of the three Asian sub-regions, Southeast Asia and East Asia expected to see a decrease in offshore spend.

“We expect Southeast Asia to account for 64% of the region’s offshore CAPEX in 2016 with key markets, including Malaysia, Indonesia and Thailand,” notes George Griffiths, senior energy researcher, Infield Systems.

“Two of the three offshore markets that make up the South Asian sub-region; India and Bangladesh have the potential to see increases in offshore spend year-on-year, with India continuing to be the main driver of offshore CAPEX (84%),” he says.

“The East Asian sub-region driven largely by developments in China may see a fall in offshore spending year-on-year (-22%).

“Infield Systems’ projection for China shows a possible 40% decrease in offshore spend in 2016 in comparison to 2015, while the other two markets, which make up the rest of East Asia, Russia and South Korea, have the potential to see increase in offshore CAPEX.

“We expect Asia to account for just over 16% of global offshore CAPEX in 2016, which means Asia could see the third highest level of offshore spend globally in 2016 after Latin America and Africa,” Griffiths adds.

China and Australia will continue to account for the bulk of 2016 spend, reflecting continued investment in Australian LNG projects, and the capital required to maintain oil output and ramp up supply for increasing domestic gas demand in China.

The bulk of investment in China will be onshore, Harwood says whilst onshore coal seam gas (CSG)-LNG projects in Australia will also continue to attract significant investment. “But, remaining onshore areas in the Asia-Pacific are relatively mature, so future investment is expected to focus offshore,” he adds.

While offshore could be a bigger focus, Infield Systems expects to see a 26% reduction in the number of offshore developments in Asia entering production year-on-year. This reduction is due to the declining number of field developments anticipated to come onstream in the Southeast Asian and East Asian sub-regions.

“The Southeast Asian sub-region could see the largest number of developments enter production during 2016 (43%), with Malaysia and Indonesia together potentially accounting for 81% of the number of fields expected to start production,” Griffiths says.

“Indonesia, which saw the highest number of offshore developments come online in 2015, is anticipated to see a 65% reduction in the number of fields entering production in 2016.

“In South Asia, Infield Systems expects just over double the number of fields entering production in comparison to 2015, predominantly as a result of activity in India,” he adds.

According to Harwood, Chinese national oil companies (NOCs), such as China National Petroleum Corp. (CNPC), China Petroleum and Chemical Corp. (Sinopec) and China National Offshore Oil Corp. (CNOOC) will be the biggest spenders in 2016 by virtue of their continued investment in domestic operations.

“Of the international oil companies (IOCs), Chevron will remain the largest spender, as it progresses the Wheatstone and Gorgon LNG projects in Australia,” he says.

ONGC may see the highest levels of offshore spend in Asia, with the NOC’s entire offshore investment likely to be focused on projects in India. The giant Mumbai High oil field could account for the largest share of ONGC’s CAPEX, including large investments in the Teh S-1 and Vashishta VA-1 gas fields in the KG basin and producing Vasai development.

PETRONAS could see the second largest offshore spend in the region during 2016, with Malaysia continuing to be a major focus of its projected capital expenditure in Asia.

A noteworthy project that PETRONAS is expected to have involvement is the Kanowit gas field, which will see the deployment of Asia’s first floating LNG (FLNG) FPSO this year, Griffiths says.

“The Rotan field is also expected to see a large amount of investment, due to the development of PETRONAS’ second FLNG FPSO that will be deployed at the field beyond 2016. PETRONAS is only expected to bring onstream one new field development in 2016 and it will be its Sarawak NC03 gas field.

“In terms of supermajor activity in Asia, Shell, Eni and Chevron are expected to spend the most on offshore projects during 2016. Shell’s projected expenditure will be on continuing development of the Gumusut-Kakap hub and the new Malikai field,” Griffiths continues.

“All of Eni’s 2016 offshore spend in Asia is expected to be focused towards the company’s developments in Indonesia, located in the Kutei basin.

“A noteworthy development Eni is currently developing is the Jangkrik gas project expected to start operations in 2017, which will see the deployment of a floating production unit (FPU).

“The FPU will be built by a consortium comprised of Hyundai Heavy Industries (HHI) and a joint venture made up of Saipem, Chiyoda and Tripatra Engineers and Constructors,” he explains.

Chevron, on the other hand, is expected to develop a number of fields in Thailand and Indonesia during 2016, with Thailand projected to be the largest focus of expenditure.

Key projects in Thailand include its new Ubon and Pailin area developments, whilst in Indonesia Chevron’s Bangka oil field, part of the Indonesia Deepwater Development (IDD), is expected to see some investment.

Wood Mackenzie has reduced its forecasts of global capital spend. This has been brought about by a reduction in discretionary spending, through the scaling back of exploration plans and the deferral of new project sanctions.

“Our global upstream project tracker details 175 projects, accounting for 72 billion boe of commercial reserves, for which investment has yet to be sanctioned.

“If oil prices remain lower for longer, these projects would be at risk of being delayed or cancelled altogether, creating a lack of new supply coming to the market to meet global demand,” he concludes. 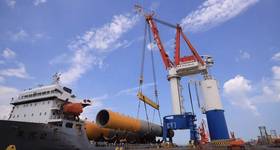